ABOUT US | IT ALL STARTED
WITH A BREATH TAKING VIEW

At Ia, in Santorini, are hanging on the huge cliff-interior of the big cratere-, the beautiful traditional and luxury houses “ifestio villas”.

Exactly under the central square’s church “Panagia Platsani” they gaze at palea and nea kammeni, black rocks and made of lava, to dominate in the middle of a gigantic cratere that is full of the deep aegean blue ….

Immobile figures that made this island special and unique all over the world.

In 1984 we had the information that in Ia, there were some “caves’ on the caldera’s cliffs that were looking for… someone to reanimate them !!

So, we ‘ve got, from an old seaman, named Mihalis or “Closso” (cause everybody has a nickname in Ia), a real ruin that inside was in good condition, after the earthquake of 1956.

It was a Historical, authentic traditional cave-house.(Villa hercules today, the reception). With the “sala”(living room), the small kitchen (kouzini) with its chimney, the back- room (piso kamara) and the “sospito”(inside house), a cave-room where they were storing the wines with the appropriate temperature and humidity.

Like sculptores, the old owners, carved houses in “aspa”, a strange material that came from the gut of the volcano and covered the island.. A magic material that you can see only in Santorini.

Aspa keeps the caves hot during Winter and fresh during Summer. It is easy to dig, but at the same time is more resistant than ferro-concrete !!

We had been charmed from this strange but wise architecture, so immediately we started the reinnovation.

The materials for the reconstruction were transported by the simpathetiic mules of Oia. In the small stair-streets they carry heavy materials during the winter, and turists during the summer !

The local workmen took the responsibility to recreate the house, according to the rigorous rules of the tradition, inside and outside.

It was a hard job, and it needed a whole year to complete. Our personal work… enormous.

Every weekend we were there (from Athens), with the workmen.

But the result rewarded us !!

In 1989 we decided to build two more houses, up and down.

We allready had our children, Agis (Villa Agis) and Iraklis (Villa Hercules).

The upper house has the owner’s name (Villa Paride)

They are all ancient greek names, from Greek mythology.

Agis was the King of Sparta.

And Paris, was the Trojan that stole the beautiful Hellen, and was the reason of Trojan war ! 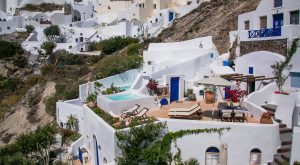 AND NOW, A FEW WORDS ABOUT THE “SOUL” OF IFESTIO VILLA’S : KATERINA SPYROGLOU

katerina is an architect. She studied in Florence of Renesance where she obtained appart from the diploma of architecture, a developed sense of aesthetisism in combination with the practice, in every space she works on.

With this knowledge, with will, with respect to Ia and its tradition, but also with a lot of love, these beautiful and functional houses were built. She took care of everything, from the construction untill its last aesthetic datail.

In 2005 the houses were completely reinnovated. They became new, with high standards so that staying in them is a real pleasure !

In Ifestio villa’s, Katerina will wellcome you herself, always cordially and very friendly, and she will take care of everything, so that your stay will be perfect !

She will give you all the essential information, so that you will fall in love with the island, with its particular geologic and historic interest, with the fabulous beauty, with its divine tastes, with its clear and mysterious deep blue water…..

As the Ifestio Villas its new era a series of services and amenities are now available for its new “Santorinian” guests to enjoy; great offers, upgraded services, and above all simple and easy direct booking through our website!

The Ifestio Villas people will help you through all the details of your reservation, inform you about distances and transfers to and from the hotel and answer all the questions regarding your stay and getting around in Santorini.

The new era of  Santorini Ifestio Villas is an experience that starts as soon as you book directly through our website!

to hear from you !